Listeners phoned Steve Price after seeing the two signs on Spit Rd, before and after the Spit Bridge, at Seaforth and Mosman.

Callers are telling @StevePriceMedia about an extremely offensive political image near the Spit Bridge.

Have you seen it?

Both show an image of the member for Warringah’s face.

One has the word “Pell” across Mr Abbott’s forehead and has been posted on the outside wall of a day care centre at Seaforth.

The centre has been receiving abusive phone calls from supporters of Tony Abbott, accusing them of allowing the poster to be posted. 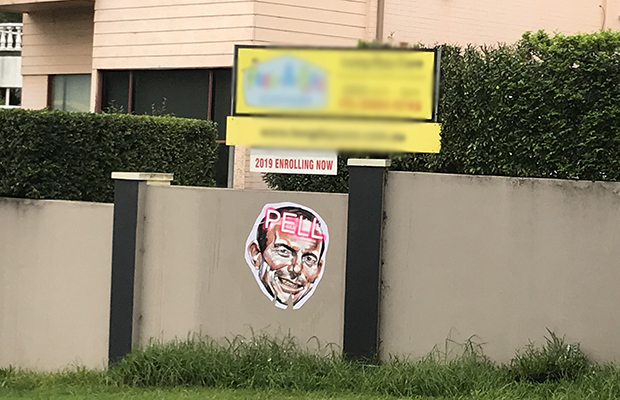 NSW Police has released CCTV footage of the men believed to be involved.

Both men are described as being Caucasian in appearance, both aged in their late 20s or early 30s.

The owner of the centre, Rita, has phoned Steve Price after going out and scraping the sign off her wall herself.

“It’s disgraceful. I have no words.

“I’ve got staff who are in tears after receiving these phone calls. Which is not okay.

“It’s a very dirty campaign but just keep innocent people out of it.”

The other sign has a vile expletive written across Mr Abbott’s forehead and has been placed above a bus stop on the extremely busy Spit Hill heading towards Mosman. 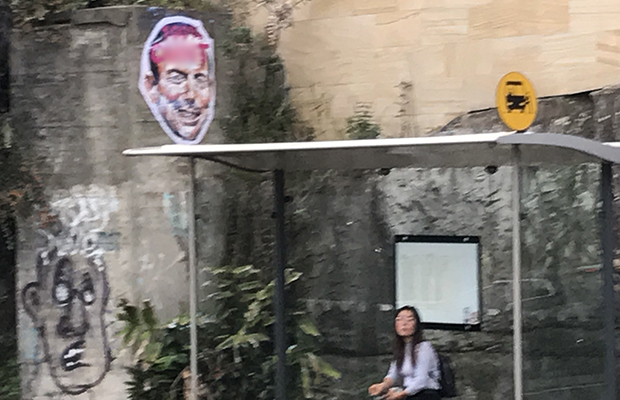 Listener Mick rang in to tell Steve Price he was there when the posters were being put up in the early hours of the morning.

“I saw it this morning when they were putting them up. I’m a tradie, it was at four o’clock in the morning.”

Another caller has told Steve Price he spoke with police who were supervising its removal.

“To treat him this way is a disgrace.

“I’m confident most that Australians don’t buy into this stuff, and they shouldn’t.”

Liberal Senator Conchetta Fierravanti-Wells tells Steve Price, whoever is responsible for the posters should be ashamed.

“This is a new low, a new low in political life.

“I’ve been involved in political life since the early 1990s and I have to say, Steve, that this is absolutely digusting.”

Tony Abbott has responded to the posters, saying he’s never seen this sort of thing in politics before.

“I think this is a new nastiness in Australian politics.

“I say to all the decent people in Australia, if you want to try to lift the tone of our public life… don’t, in any way, give aid and comfort to these nasty elements.”

The Alan Jones Breakfast Show has put in calls to left-wing activist group GetUp and to Tony Abbott’s political opponent in the seat of Warringah, Zali Steggall.

Ms Steggall has now released a statement, denying any involvement in the smear campaign.

(1/2) My volunteers have signed an extensive code of conduct. They are under strict instructions not to engage in negative behaviour, as I have been the subject of a non-stop smear campaign from Mr Abbott and his supporters and do not condone that type of politics…

(2/2) … I strongly reject any allegation that the posters have anything to do with my campaign or my volunteers, and call upon anyone suggesting that it does to provide evidence.