Sweet revenge! Ray Hadley finally gets back at Fitzy and Wippa

Ray Hadley has returned serve to his mates Fitzy and Wippa, with an ingenious Valentine’s Day prank.

After they enlisted the help of Human Nature to prank Ray during his Morning Show, Ray thought it was about time he hit back.

Nova’s lovable duo would have found a cheeky message on page 74 of today’s Daily Telegraph. 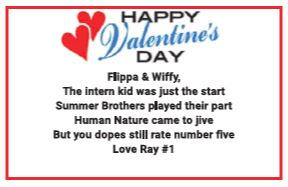 Ray Hadley called up their show in disguise from Coffs Harbour.

“We were waiting for the comeback, you finally got there!” Fitzy jokes.