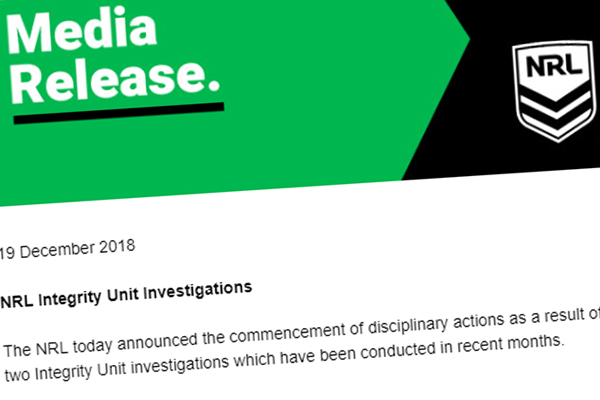 CEO Todd Greenberg has notified Cronulla Sharks Coach Shane Flanagan and Wests Tigers CEO Justin Pascoe of his intention to cancel their registration from the game.

Flanagan is accused of having significant involvement with the Sharks during his 12-month suspension from the game in 2014.

The NRL claims “documents have been uncovered” proving he was involved with the “recruitment and retention of players” and says it will fine the club $800,000 and boot Flanagan from the game altogether.

The Sharks have scheduled a media conference at 1.30pm (AEDT) to respond to the findings.

He’s accused of offering star player Robbie Farah an ambassador role after her retires, worth $639,000.

The NRL plans to fine the Tigers $750,000, add the alleged amount offered to Farah to their 2019 salary cap and deregisters Pascoe from the game.

The Wests Tigers have responded to the notice saying the club “will be vigorously defending” itself against the allegations.

“The club is shocked with the decision and extremely disappointed in the process.

“Wests Tigers are particularly concerned about the wrongful attack on the integrity of the club’s CEO. For the last three years Justin has shown nothing but respect for the NRL and the salary cap.”

OFFICIAL — Wests Tigers has today been issued with a preliminary breach notice in relation to an ambassador agreement with Robbie Farah.

The club is shocked with the decision and will be vigorously defending this.

Both Flanagan and Pascoe will be given until the end of January to appeal the decisions but will be banned from any involvement with their respective clubs until then.

NRL CEO Todd Greenberg has indicated the evidence against both men is extremely compelling.

The ‘Big Marn’ Darryl Brohman has been friends with Shane Flanagan for 30 years and says it will be a “tough day” for him.

“I’m just hoping he can get through this alright,” Brohman tells Luke Grant.

The Continuous Call Team commentator says if Flanagan has done the wrong thing, he needs to face the consequences.

“If he’s found guilty of communicating with the club when he shouldn’t have been… he has to be penalised.”

The NRL today announced the commencement of disciplinary actions as a result of two Integrity Unit investigations which have been conducted in recent months.

The Integrity Unit has found evidence that supports the preliminary finding that Sharks coach Shane Flanagan continued to have dealings with the club while he was suspended in 2014.

At the time, the Sharks were fined $1 million – with $400,000 suspended – over the administration of supplements at the club.

Mr Flanagan was suspended for 12 months with three months suspended.

One of the conditions imposed by the NRL was that “the club must not allow Mr Flanagan to be concerned directly or indirectly with the club” while suspended.

As part of the current investigation into the Sharks salary cap, documents have been uncovered that support the preliminary finding that Mr Flanagan had dealings with the club in relation to recruitment and retention of players.

As a result, the NRL has issued the club with a breach notice proposing a fine of $400,000 – the same amount which was originally suspended.

In addition, Mr Flanagan has been issued with a notice of intention to cancel his registration.

While the findings are preliminary and no final determination will be made until the response he provides has been properly considered, he will not be permitted to coach or act in any official capacity at the club pending a final determination.

Mr Flanagan and the club will be given until the end of January to respond.

The Wests Tigers have been issued with a breach notice relating to an undisclosed agreement to pay Robbie Farah as an Ambassador when he finishes his career.

The agreement was made in 2016 before Farah left the Tigers to join South Sydney.

The NRL believes the payment should have been disclosed and included in the salary cap.

Further, the NRL has issued a notice of intention to cancel the registration of the club’s CEO Justin Pascoe.

Like Mr Flanagan although the findings are preliminary, he will not be permitted to act in an official capacity with the club pending a final determination.

There is no suggestion that Farah has done anything wrong but the NRL believes the club should have disclosed the agreement.

The club and Mr Pascoe will have until the end of January to respond to the preliminary findings that have been made against them.