South East Queensland has been smashed by storms but the Bureau of Meteorology says the worst is over.

At the height of the storm thousands of homes were left without power.

“They copped hail, and that is what is heading our way at the moment,” Nine weather presenter Luke Bradnam told Scott Emerson.

“We have seen hail up around the 5cm mark.

“It looks a massive band stretching from the Sunshine Coast right the way down to the Gold Coast, so all of us in the firing line.” 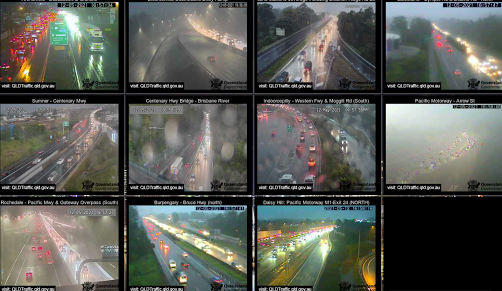 Press PLAY to hear his predictions and forecast

“Honestly this storm looks apocalyptic from where I am standing, I have never seen the sky so dark up here on top of the mountain.”

It’s a bit wet out. pic.twitter.com/7AUWoeAVA8

Caller Todd says it’s “rather green” in the sky in Petrie.

“Heavy rain, a lot of lightning coming through. And just the sky colour has gone from dark grey to light green.”

Bernie, the publican at the Esk Club Hotel, crossed to Scott after the storm.

He said he had heard reports of hailstones.

“It rained heavy for about an hour but no hail.”

Leanne, who works at Blue Fin Fishing Club Inala, said there was a lot of rain and a little bit of hail and lightning.

Press PLAY below to hear the weather round-up