Up to a million fish have been killed at Menindee Lakes, south-east of Broken Hill, following the mismanagement of water in the Murray Darling Basin.

Primary Industries Minister Niall Blair went to the region on Wednesday but pulled out of an arranged meeting with locals.

He sped past the gathering in a boat twice but failed to stop, further angering residents who had travelled for hours to be there. 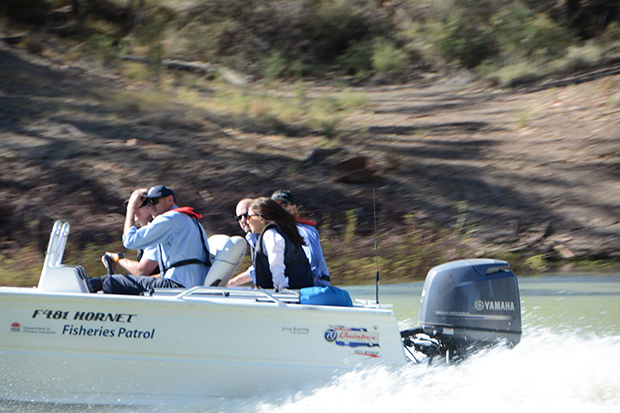 Steve Price questioned the Minister about why he shunned those wanting to speak about the disaster.

“You didn’t fear for your own personal safety did you?” asks Steve.

“Yeah unfortunately there were threats directly made and people even offering money to carry out those threats,” says Minister Blair.

“I met with locals on the banks of the river but unfortunately someone had broadcast where we were going to be launching the boat.

“Some people decided to go and make threats towards me and unfortunately we have to take those things seriously.”

“There didn’t look like too many violent people there to me mate.

“It was really disappointing for all the people that made the effort to go there.”

A video of Menindee residents Dick Arnold and Rob McBride has gone viral, showing the devastated men holding dead Murray River cod that are over 80-years-old.

She tells Steve it doesn’t do the horrifying scene any justice.

“It’s hard to explain over the radio just how bad it is.

“We were dry-wretching. I don’t think any of us are ever going to be able to eat fish again.

“It’s just a horrible sight. The smell is terrible and the locals in Menindee are having to deal with it day in, day out.”

Click PLAY below to hear the full phone call

‘Up to a million fish dead’: Murray-Darling River disaster worsens