EXCLUSIVE | Virat Kohli: ‘I don’t find the need to get involved with the opposition’ 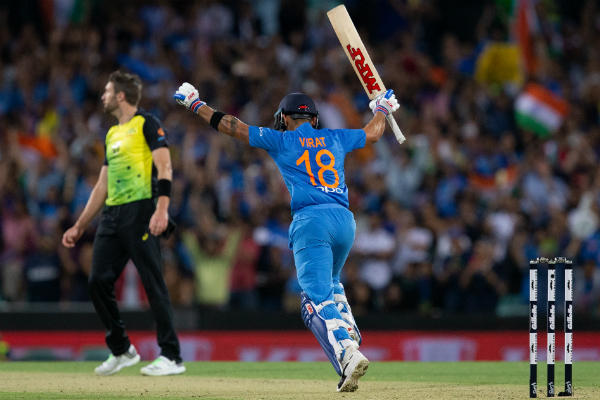 Indian captain Virat Kohli says he no longer feels the need to get involved in the niggle and sledging with opposition teams.

It comes as Kohli prepares to lead India in a four-match series against Australia in what is set to be the Indians best chance of winning a Test series on Australian soil.

In previous tours – the 30-year-old has clashed with several Australian players including the likes of David Warner – which can only be attributed to the competitiveness of both individuals.

But Kohli – who since taking on the leadership reigns – has taken his game to another level says he no longer feels the need to prove himself anymore.

“You learn from every series, every tour, every game that you play,” Kohli said.

“I think from last time round, I’ve become more assured of myself, I don’t really find the need to prove anything to anyone.

“It’s all about doing what the team wants me to do and just giving my 100% on the field, it’s a gradual process, I don’t really feel anything different when I go to tour countries now, it’s more a process now.

“In the early stages of my career I used to think of these things as important milestones which are really important in one’s career, but now the focus is purely and solely on making the team win at any cost.

“So from last time round I think I’m more assured of myself, I don’t find the need to get involved in anything with the opposition and I think those are changes that keep happening gradually as you go forward.”

Kohli is currently one of the best batsmen in world cricket – averaging 54.57 in Test matches including 24 hundreds – while he has scored over 10,000 runs at a whopping average of 59.83 in ODIs.

Often compared to the little master in Sachin Tendulkar – Kohli also averages 49.25 in the shortest form of the game – helped by a match-winning half century against the Aussies only a week ago.

With Australian cricket undergoing a turbulent six months on the back of the dramatic ball-tampering scandal in South Africa – the hosts will be looking to turn it around back at home in the longest form of the game for the first time since the incident.

Cricket Australia underwent a historic review on the back of the darkest day in Australian cricket – aimed at changing the culture of the national team.

However, Kohli is still expecting an aggressive battle from the hosts.

“Not really, you might not see the same kind of stuff that happened in the last series,” Kohli said.

“But I think in terms of their body language and intent that they have, I’m sure they’re still going to be aggressive in their minds.

“That’s the way Australia have always played, I don’t think there’s any other way they like to play their cricket.

“I don’t see any incidents happening on the field, I think it’s going to be competitive cricket.

“They’re definitely going to bring their A-game and expect us to bring ours, so we definitely expect stiff competition from Australia as always and we’re definitely not taking anything for granted.”

The first Test gets underway at the Adelaide Oval on December 6.

Listen to the full interview below: