The outage is being described as intermittent and anyone needing police, ambulance or fire assistance is still urged to call Triple Zero in the first instance.

Telstra says the restoration of the cable is complete, but some services are still out.

The company says a cable cut between Orange and Bowral caused interruptions to phone services around the country.

Police say people should still ring 000 first, but if they can’t get through they should dial 131 444.

Telstra says damage to the cable pit, pictured below, is consistent with fire damage from a lightning strike. 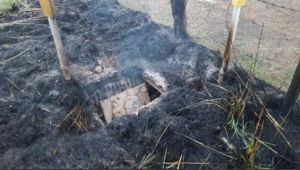 “If they can’t get through triple zero in the first instance, ring the Police Assistance Line 131 444 and that allows us to coordinate the response,” he tells Ray Hadley.

“The option that always exists it the local police station.

“Everyone should know what the local police station number is so they can make that call.”

Listen to the full update below

Telstra and Commonwealth Bank also appear to be having problems with their mobile and EFTPOS services, but it appears the two issues are unrelated.