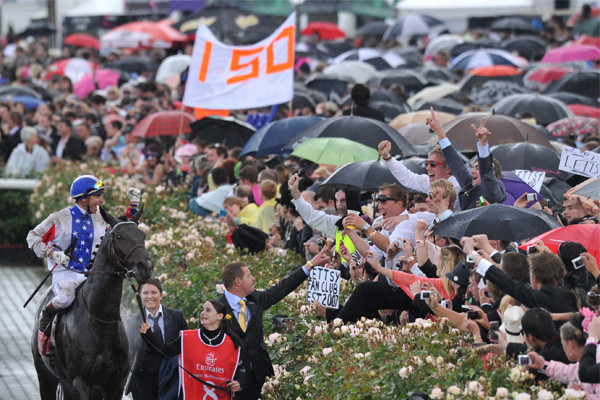 Up to 100,000 people are expected at Flemington Racecourse but millions more around Australia and the world will be watching come 3pm.

Torrential rain hit the track earlier this morning but has since cleared, with a final rating still to be determined.

Sweeps, luncheons, champagne and fascinators will be the order of the day at offices across the country as Cup fever takes over.

One of the great names in the history of the Melbourne Cup is owner Lloyd Williams.

He’s won the great race a total of six times and is going for three in a row.

His horse Yucatan is the favourite at $6.00 and his other runner Cliffs of Moher is in with a great shot at $17.00.

“I’m not terribly confident in the rain I have to tell you. I would have preferred it not to have come.”

There’s been a rise in Melbourne Cup ‘objectors’ this year but VRC Chairwoman Amanda Elliott tells Alan Jones the race has maintained its relevance.

“It is extraordinary, it really is. It’s Australia’s original major event.

“I think through 158 years, successive VRC committees and boards have done a magnificent job of what we spoke about earlier, which is relevance.”

Corey Brown has lived out every jockey’s dream, winning the Melbourne Cup not once, but twice – in 2009 on Shocking and last year on Rekindling.

This year he’s on the back of the second favourite Magic Circle, owned by 2018’s most colourful character.

Billionaire Marwan Koukash has promised to accept the Melbourne Cup in nothing but a pink g-string.

Brown tells Alan he asked for the ride on Magic Circle months ago.

“I’ve been booked for about three months now. I liked what I’d seen on the replays and he’s very impressive.”

Australia’s leading horse trainer Chris Waller has three contenders in the 24-horse race – Youngstar, Finche and Who Shot the Barman.

Youngstar and Finche are his best chance but Waller tells Alan Who Shot The Barman is “pretty good” in the wet.

“The thing about The Barman is he did win the Sydney Cup only six months ago.

The first Tuesday in November is a stressful day for a lot of people… jockeys, trainers, owners, punters, ground staff and plenty more.

But nobody has a more difficult task than Matt Hill, the Melbourne Cup race caller.

For three minutes this afternoon the ears of around 800-million people will be tuned into Matt’s voice as he calls Race 7 at Flemington.

He has to memorise every horse name, jockey and silk colour for 24 horses.

But, there are another nine races on Melbourne Cup Day, with a total 174 starters.

Matt is preparing to call just his second Melbourne Cup after taking over from legendary caller Greg Miles last year.

The 37-year-old tells Alan he “knows the cup field forensically”.

“It’s just one of those things, photographic memory I suppose.”

Sports journalist-turned-breeder Anthony Mithen is the part owner of one of the few Australian horses to run the great race today, Runaway.

Despite a career in journalism, Anthony says he was determined to be in the racing industry.

Principal of Rosemont Stud Anthony says he’s got about 450 horses under management.

“It’s a big operation, and I’m proud to be at the head of it, and proud of the staff that do so much hard work.”

The race that stops the nation