The award is in honour of the late immortal Bob Fulton, with the team judging the best players each match and awarding them 3 points, 2 points and 1 point.

Despite missing parts of the season through injury, Trbojevic finished on 37 points, two ahead of South Sydney five-eighth Cody Walker, and Penrith halfback Nathan Cleary who finished third, four points behind.

The 24-year-old has scored 27 tries from 17 games and told The Continuous Call Team it’s a privilege to win the inaugural award.

“I’m really honoured to get that. 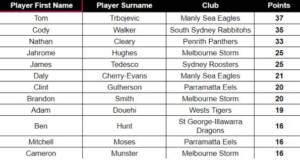 Team of the Year (best by each position)

Rookie of the Year – Daine Laurie