Reporters tear gassed as violent protests rage across the US 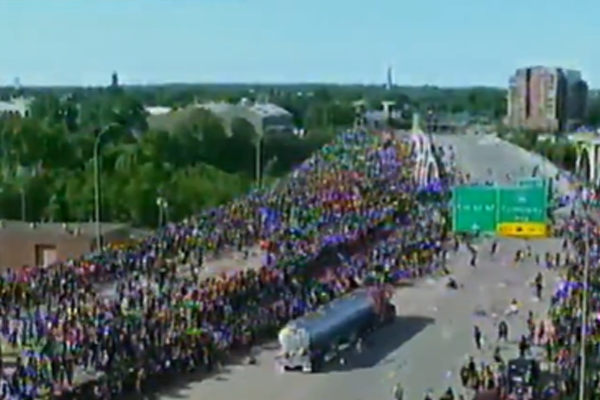 Civil unrest continues across America with violent protesters clashing with police nationwide, and reporters are getting caught in the crossfire.

Riots have erupted in the Nation’s capital with Amelia Adams, 9News US Correspondent in Washington DC reporting to Deborah Knight whilst in the middle of tense scenes outside the White House.

“We’re just getting out of a very very difficult situation. We are in front of the White House, there are buildings on fire… we just got hit by tear gas… oh, it’s hard to breathe.”

The scene outside the White House with moments til curfew kicks in. @9NewsAUS pic.twitter.com/ICayMewMzj

Ms Adams said what started as a peaceful protest has escalated into a violent demonstration with projectiles being thrown at police and police returning fire with rubber bullets and tear gas.

“Protesters have dragged every piece of debris that they can find… [including] American flags, into a huge pile in the middle of the road outside the White House and set it on fire.

“It is burning up into a tree now.”

This latest clash comes not long after a truck drove into a George Floyd protest on a bridge in Minneapolis.

Footage emerged of an 18 wheel petrol tanker driving at speed along a bridge packed with protestors, as people frantically jump out of the way.

Nine US correspondent Tim Arvier broke the news with Ray Hadley telling him, “a fuel tanker, a semi-trailer has just driven through into protestors on the highway.”

“The truck driver was injured and taken to the hospital with non-life-threatening injuries.

“He is under arrest.

“It doesn’t appear any protesters were injured by the truck.

“Certainly dramatic scenes and the crowd is fired up now and police are moving in.

“Police are just so jumpy at the moment…they are so nervous about everything that is going on because of incidents like the one that has just happened.”

Click PLAY below to listen to the full interview

Tim Arvier and his team were tear gassed by police not long after speaking to Ray, after rushing to the scene of the incident.

After being pushed back off the highway, protesters linked arms and advanced on police, who responded with tear gas, stun grenades and rubber bullets.

“We were on a hill, we thought we were okay because we were off to the side, filming this all as it happened.

“But then the police moved forward and said ‘you can’t be there’, and they forced us to run back through all the tear gas.

“There was a lot of tear gas.”

Police dispersing protestors away from semi with tear gas pic.twitter.com/sXL1FLNC9v

Mr Arvier spoke to the man who pulled the truck driver from his cabin.

“He told me he punched him twice, but then they decided they wanted to keep him alive because they didn’t want to create … a version of George Floyd[‘s death] but in reverse.

“They needed to keep him alive at the City of Minneapolis so he could face justice.”

The latest drama follows almost a week of violent rioting and peaceful protests which have raged across America following the death of African-American George Floyd after a white police officer pressed his knee on his neck until he stopped breathing.

The National Guard has been rolled out in some areas to stem the violence and looting, while 20 major cities now have curfews in place.

“When you combine it, for example in… Minnesota where unemployment is now 22 per cent and the coronavirus has had people locked up for an extended period of time, and people are fearful of the future.

“Combined with an ingrained division in the community on race then it really is a fragile situation… across a number of cities.”

Click PLAY below to listen to the full interview