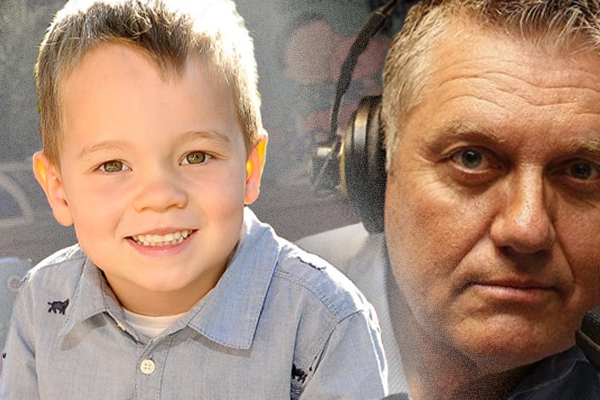 Ray Hadley has paid an extremely emotional tribute to an inspirational colleague.

Today marks one year since the lives of Macquarie Media employee Belinda Bargwanna and her husband Derek were turned upside down.

Their beautiful little boy Tate became sick and died within a matter of hours, at just four-years-of-age.

On the anniversary of the horrific events, Belinda posted a touching tribute to her little boy which left Ray, and all of us here at Macquarie Media, in awe of her strength.

“Tate came down with what we thought was just a typical bug. Fever and cold we thought. We were wrong.

He went to sleep and just never woke up. It all happened in just 10 hours.”

With Belinda’s permission, Ray shared the post with his listeners, explaining why he feels such a deep personal connection with her family.

“I went to Tate’s funeral service on a Saturday morning,” says Ray.

“I had some things to deal with at the time that I thought were pretty tough but going to that funeral service of that darling little boy made me and many others start to think that maybe we’d been dealt a pretty fair hand in life compared to what Belinda, Derek and the family were confronting.

“And she knows everyone in here, including me, loves her dearly.”

A year ago our lives were shattered and changed forever. Somehow we survived the relentless, intense and excruciating emotional and physical pain. There’s still not a day that goes by that we don’t cry. It could be a quiet tear on the way to work or it could be uncontrollable tears.

In the beginning we were in shock, numb and confused. But then over time the intense feelings surfaced. Our subconscious serves them up when we’re ready and able to cope.

Once I gained enough courage to leave the house I would get so angry at strangers that would bump into me at the shops. I just wanted to scream at them “Get out of my way, don’t you know I lost my son!” But of course I didn’t. I put my sunglasses on and cried without anyone knowing.

Tate came down with what we thought was just a typical bug. Fever and cold we thought. We were wrong. Inside his little body his organs were fighting a ‘raging bacterial infection.’ His body was fighting so hard he developed Sepsis. It was this that took him from us. He went to sleep and just never woke up. It all happened in just 10 hours.

For months I’ve asked myself; how could an ordinarily healthy 4 year old boy die so suddenly? Why couldn’t I tell he was so sick? I’m his mother, it’s my job to protect him. Could I have done something to change the outcome? Doctors have since said that some bodies don’t show all the symptoms and it wouldn’t of been obvious because he was so healthy. We have also been told even if we did recognise it and get him to a hospital, its highly likely it would have been too late and he would not of been the same Tatey we knew. We couldn’t have done anything, we had no control.

Through our tragedy we have learnt there are so many good people and so much kindness in the world. Thank you to the people that ran towards us and didn’t run the other way – that takes courage and we acknowledge that. We are so grateful for our family, friends, work and our local community who have walked with us through our journey of grief. Picking us up when we were distraught and holding us tight in moments when we just can’t hold it together anymore. Thank you to those who take the time to randomly text us and check in, it makes us feel like we’re being hugged. Thank you to the support from Red Nose Grief and Loss who continue to be there for us at our most vulnerable moments and show us we’re not alone.

Pretty early on we came to terms that sometimes bad things happen to good people. To keep living life after the worst thing you could imagine isn’t survival, it’s endurance.

I find comfort in reading about how other people just like us, have made it through the worst days of their lives. One thing’s for sure we are way stronger than I ever thought!

From Leigh Sales’ ‘Any Ordinary Day’
The things you think you wouldn’t be able to survive – you probably can. You will be ok. There’s really only one lesson to take from all of this and that is to be grateful for the ordinary days and to savour every last moment of them.

It is so comforting to know that our little boy touched so many lives in such a few short years.

Tate what we would do to have you back with us, even for just an hour! To hold you again, smell you again and even just to hear your laugh one more time.

In memory of Tate please share your memories of him in this post. We will print them and keep them forever xx.