Six people have been charged and an arrest warrant has been issued after a major international drug bust by Queensland Police.

Four people have been charged in QLD and NSW after the biggest MDMA seizure in Queensland history, with 766kg of MDMA powder and $108,000 in uncovered.

Police say the powder could have produced between six and 12 million pills with a street value of around $90 million. 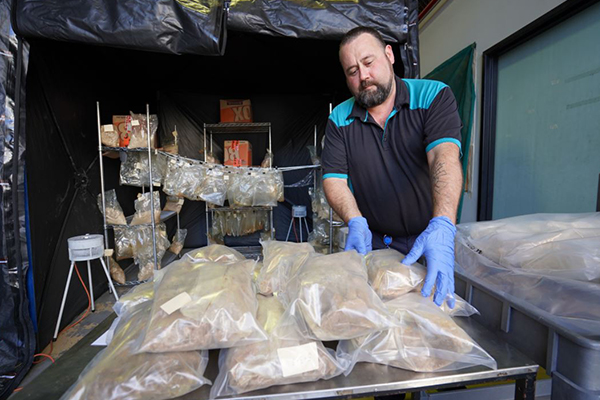 The raids south of Brisbane and in northern NSW were conducted after 200kg of ice was seized in Auckland last week and two UK citizens were arrested.

Two more British men – a 51-year-old and a 40-year-old – and a 26-year-old man from Longanlea were arrested and charged with drug offences in Brisbane yesterday.

They have been denied bail and will appear in court at a later date.

A 51-year-old NSW woman was also arrested at Lennox Head and charged in relation to the money found and an arrest warrant has been issued for a 42-year-old NSW man.

Strategic Policy Institute’s head of the North and Australia’s Security Dr John Coyne tells Ross Greenwood he supports law enforcement but there needs to be a new approach.

“In terms of the economics, government and law enforcement are trying to gauge the loss that it’s causing by the street value of the products, but clearly these products didn’t cost that much to manufacture.

“Simply, the rate of volume coming in and law enforcement capacity doesn’t match up, so we’ve got some really big problems and we have to change our approach.”