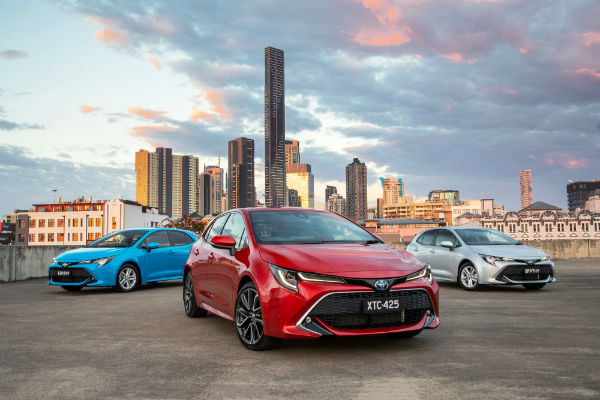 A new Toyota Corolla has arrived – the 12 th generation in fact and I vividly remember driving one of the first generation models back in 1967 , the Corolla back then so small that today it would be called a micro car. Some 45 million have found homes since then, Australia’s most popular car and one with a strong reputation for serviceability and reliability. The new model breaks some new ground, at last with some cutting edge style but Toyota have become somewhat bullish with pricing despite the fact this new model offers much in equipment with one exception, especially for a car that appeals to younger buyers – media connectivity in the form of Apple Car Play and Android Auto is missing. Also interesting is the deletion of the entry fleet-skewed Ascent model – the range now kicking off with the 2.0-litre Ascent Sport hatch at $22,870, a higher entry point to the Hyundai i30, Kia Cerato and Mazda 3 which is somewhat of a surprise. I haven’ driven the new model but sitting in it it feels classier, offering more interior width and a nice 7-inch colour touch screed. Visually it’s a step up on the previous model with nice materials inside. Three new Corolla grades, Ascent Sport, SX and high-grade ZR, all three also available as a 1.8-litre petrol/electric hybrid for the first time, adding $1,500 to each grade. Above all else the styling on this new Corolla hatch is striking – something we can rarely say about a Toyota and, perhaps like their C-HR SUV, a welcome change of emphasis by Toyota to more visually appealing models. I’m David Berthon