Matt DuftyPAUL MCGREGORSt George-Illawarra Dragons
Livewire Dragons fullback recounts the emotions leading up to Paul McGregor’s final game in charge, which resulted in a hard fought win over the Eels.
“Obviously we had something to play for. During the week there was a lot of speculation and when Mary told us on the captains run it was actually pretty sad.
“Everyone’s been talking about it for a while, wondering if it’ll actually happen. When it does actually happen and you see someone you respect as the coach getting emotional and telling the boys this will be the last game, and he’s just thanking everyone for everything he’s been through at the club, it’s obviously hard seeing someone you respect getting emotional like that.
“It’ll be different with him not being there. He gave me my first grade debut. He’s the only NRL coach I’ve had. It’ll be interesting moving forward.”
On his own sparkling form, Dufty said the coaches believe in him.
He also exclusively revealed that the much publicised conversation with Paul McGregor about moving to the Titans was actually had with assistant coach Shane Flanagan!
It was put to Dufty that he could go to the Titans and play 20 games a year, or he could stay at the Dragons and fight for his spot. 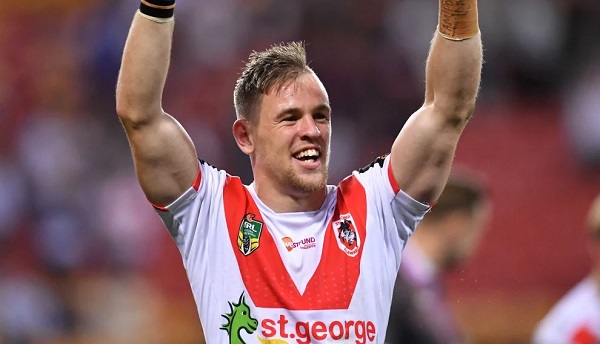