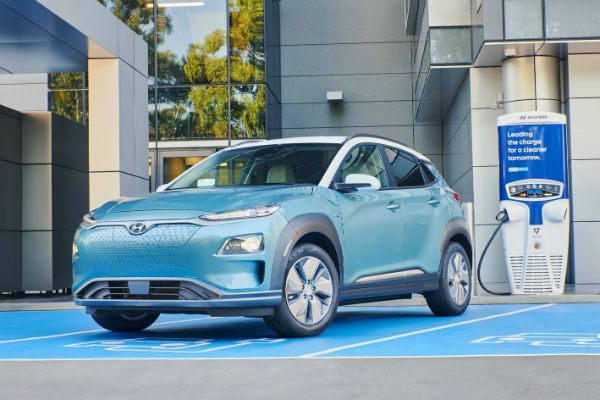 Driving Hyundai’s first all-electric SUV today, the Kona Electric which arrives with much the same body as the petrol Kona ran, but in front wheel drive configuration only. With a 150kW electric motor it features an impressive 450Km range. Plugged into a 100kW DC fast charger, which I might add are few and far between today but growing, the Kona Electric can reach an 80 per cent battery charge in just 54 minutes. Spend $2,000 on a Hyundai wall-box charger with a maximum charging rate of 7.2kW plugged into a normal household socket and it will charge the Kona to full capacity in around 10 hours. The range is impressive at 450kms, far better than the 235 km range in the Hyundai Ioniq electric hatch and nearly as impressive as the Jaguar I-Pace I spoke of last week. And of course for most daily commutes 450 km is enough range to go all week without having to worry about charging. Similar in appearance to its petrol siblings except for a closed in grille the Kona Electric is not cheap – roughly twice the price of the petrol Kona models – $59,990 in the Elite, $64,490 in the Highlander – both single speed automatic with the benefit of paddle shifters. Rather heavy at 1,700kgs, mainly due to its battery, it can bolt to 100km/hour in just 7.6–seconds. Battery warranty-8 years/160,000 km. Battery replacement cost $36,000. Driving impressions next segment but as you can see early adopters will pay heavily for a Hyundai Kona Electric. I’m David Berthon