Anna called Michael on the morning of October 22 to reminisce about coming to Australia on a warship as a young girl with her family from Europe at the end of the war.

One regret Anna has carried for many years, is that she was no longer in a position to simply put some flowers on the grave of the American ship captain who was so kind to her as a young child on that voyage.

Having heard Anna’s conversation with Michael, Clive Thomas, CEO & Chairman of CT Freight, tracked down the resting place of Captain Kenneth George Towne in Vermont U.S.A., bought some flowers and together with a note from Anna was able to have them placed on his grave to help give Anna some closure after all these years. 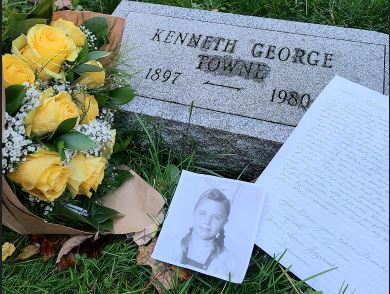