Bushfire emergency: The worst is yet to come as ‘catastrophic’ conditions forecast

Firefighters in Queensland are still battling almost 50 blazes across the state, trying to gain the upper hand before dangerous conditions arrive.

The most challenging blazes are at Thornton in the Lockyer Valley and Cobraball west of Yeppoon, where about 16 homes are believed to have been lost.

“We’re going to be moving into some very unfavourable weather conditions from tomorrow, through to Wednesday.

“We certainly continue to urge the community to stay across the warnings and make sure they keep themself safe.”

CLICK HERE for the latest information on the QLD bushfires

In New South Wales, a statewide Total Fire Ban is in force as 66 bushfires continue to burn.

Three people have died and 150 homes have been destroyed as fires have torn through more than 850,000 hectares of land already this fire season.

There are currently 40 uncontained blazes across the state with 1050 firefighters on the frontline and 60 aircraft on deployment. 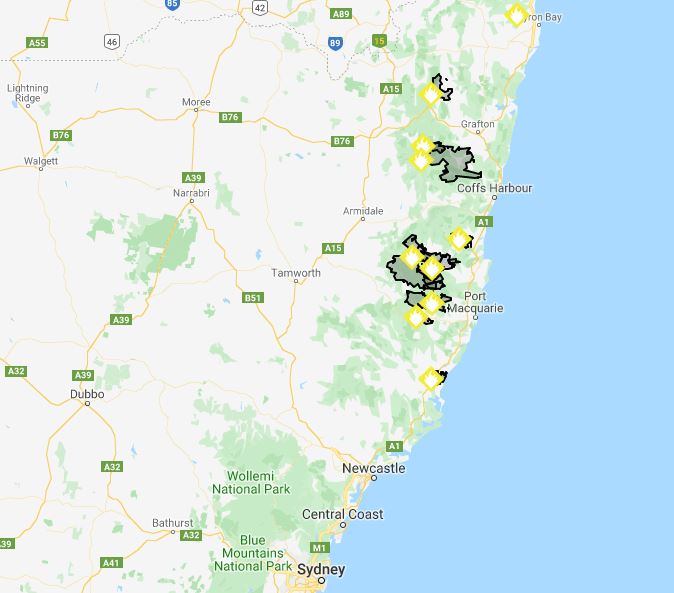 Sydney is preparing for an unprecedented day of fire danger, as conditions are forecast to deteriorate across the state on Tuesday.

It’s been 10 years since new Fire Danger ratings were introduced in the wake of Victoria’s deadly Black Saturday fires.

Tomorrow will be the first time the Catastrophic rating will be in effect for the Greater Sydney area.

“Tomorrow we are expecting it to be the worst day and when you consider we’re still three weeks away from Summer, this is a cause for concern.

“This is potentially going to be the worst situation we’ve had for quite some time.”

Glen Innes in the state’s north has been at the centre of the bushfire emergency.

Two of the three fatalities came when flames tore through the small town and its surrounds.

“We’ve been surrounded by fire and it’s been happening for a while.

“The services have been doing everything however it’s just not enough. We need more action, we’ve got to stop this!”